Most Popular Databases In 2021 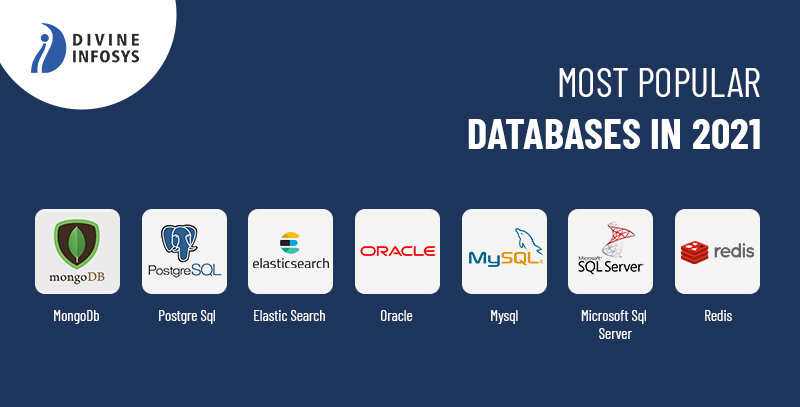 MongoDB source-available cross-platform document-oriented database program. Classified as a NoSQL database program. MongoDB uses JSON-like documents with optional schema. Instead of using tables and rows as in the traditional relation databases, MongoDB can run over multiple server,balancing the load and/or duplicating data to keep the system up and running in case of hardware failure.

Postgre is powerful,open source object-relational database system that uses and extends the SQL language combined with many feature that safely store and scale the most complicated data workloads.

PostgreSQL runs on all major operating systems. We can integrate PostgreSQL with any programming language like Java,C,C++,etc..This feature allows defining our own customized functions.

Elasticsearch is a search engine built on apache lucene.it is an open source and developed in Java. It is a real time distributed and analytical engine which helps in performing various kinds of search mechanism. It provides a distributed,multitenant-capable full-text search engine with an HTTP web interface and schema-free JSON documents.

Oracle is a powerful database server management software that can serve the requirments of Enterprice-level and small-level applications as well. Oracle database is the first database designed for enterprise grid computing.

It includes almost all the feature required to support modern applications and therefore,is widely used.

MySQL is a relational database management system based on SQL – Structured Query Language.

Microsoft SQL Server is a relational database management system developed by Microsoft. A software product with the primary function of storing and retrieving data as requested by other software applications-which may run either on the same computer or on another computer across a network.

Redis’ name comes from “Remote Dictionary Server”
A fast in-memory database and cache,open source under a BSD license,written in C and optimized for speed. Redis is Commonly used as a cache to store frequently accessed data in memory so that applications can be responsive to users.